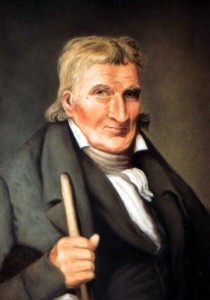 Simon Kenton was born at the headwaters of Mill Run in the Bull Run Mountains April 3, 1755, in what is now Fauquier County, Virginia (birthplace was part of Prince William County at time of his birth prior to formation of Fauquier in 1759) to Mark Kenton Sr. (an immigrant from Ireland) and Mary Miller Kenton (whose family was Scot-Welsh in lineage). In 1771, at the age of 16, thinking he had killed a man in a jealous rage (the fight began over the love of a girl), he fled into the wilderness of Kentucky, West Virginia and Ohio, and for years went by the name “Simon Butler.” He later discovered that the victim had lived, and Kenton readopted his original name. He is buried in Urbana, Ohio at N 40° 22.688 W 083° 39.399. Site of the village of Chillicothe, where Kenton ran the gauntlet

In 1774, in a conflict later labeled Dunmore’s War, Kenton served as a scout for the European settlers against the Shawnee Indians. In 1777, he saved the life of his friend and fellow frontiersman, Daniel Boone, at Boonesborough, Kentucky. The following year, Kenton was in turn rescued from the Indians by Simon Girty after enduring many days of running the gauntlet and various other tortures that should have killed Kenton.

Kenton served as scout on the famous 1778 George Rogers Clark expedition to capture Fort Sackville and also fought with “Mad” Anthony Wayne in the Northwest Indian War in 1793-94. Kenton moved to Urbana, Ohio in 1810, and achieved the rank of brigadier general of the Ohio militia. He served in the War of 1812 as both a scout and as leader of a militia group in the Battle of the Thames in 1813. This was the battle in which the famous Indian chief Tecumseh was killed. Kenton was chosen to identify Tecumseh’s body but, recognizing both Tecumseh and another fallen warrior named Roundhead, and seeing soldiers gleefully eager to carve up Tecumseh’s body into souvenirs, he identified Roundhead as Tecumseh.[1]

There is a large boulder on the west side of the Ritter Public Library, 5680 Liberty Avenue, Vermilion, Ohio that was found on a farm a few miles to the south inscribed “KENTON” and is believed to have been carved by Kenton himself. (no photo available) (no reference)

After Martha Dowden died in a tragic house fire, Simon Kenton married Elizabeth Jarboe and had 6 children in his second marriage. Kenton died in (and was initially buried at) New Jerusalem in Logan County, Ohio. His body was later moved to Urbana, Ohio. After Kenton’s death, his widow and a number of descendents went to northwestern Indiana, to an area in Jasper, White, and Pulaski Counties which was heavily settled by families who migrated there from Champaign County, Ohio, where Kenton is buried. Simon Kenton was also called Cut-ta-ho-tha by the Shawnees.

Kenton County, Kentucky is named for him, as is Simon Kenton High School in Independence, Kentucky, the county seat. A statue honoring him is along Covington, Kentucky‘s Riverside Drive Historic District, overlooking the Ohio River.

Simon Kenton Road is a residential street in a development at the base of Bull Run Mountain in Prince William County, Virginia

The Simon Kenton Council is the name of a geographical division of the Boy Scouts of America, spanning from Central Ohio to northern Kentucky.

In the Frontiersman Camping Fellowship of the Royal Rangers Indiana is designated the Simon Kenton Chapter.

The Simon Kenton Pub in Bath County, Virginia is named after this notable frontiersman.

The Simon Kenton Inn in Springfield, Ohio is located where Simon first settled in Ohio during the spring of 1799.