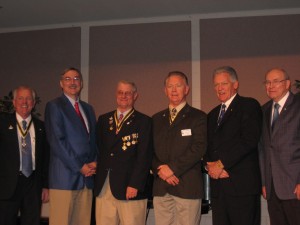 In the summer of 2008 Tom Geimeier was asked to be the keynote speaker at the Central States SAR District meeting ( Indiana, Kentucky, Ohio, West Virginia) on October 18 to be held at the Radisson Hotel in Covington. Steve Emery, Vice President of the District voluteered Tom to speak on the famous area of Kenton County known as “The Point.”  George McCain, Tom and Harry Geimeier met and decided this would be a good opportunity to speak with the current President of the Kentucky Society, David Cartmell. President Cartmell did not stay for the evening presentation, but there was a conversation regarding the formation of a new Kentucky Chapter. It was suggested that a formal letter be sent detailing our requests and actions desired.

A formal letter was immediately typed to David Cartmell, in Maysville, and the Kentucky Society, but was not sent until about a month later. The request asked for the Society to place the possible formation of a new Chapter on the agenda of the next state Society meeting.  The reason for the delay was to allow time to contact interested Compatriots and determine if a new chapter would have a strong, talented, and committed base to “hit the ground running” if our Chapter became a reality.

Several months passed without a response. Harry Geimeier and George McCain suggested Tom follow up with the Kentucky Society President for a status report on our request. Tom contacted President David Cartmell, and 2009 President-elect Tom Higgins, in February and found out the next Society meeting was the following week. Our request was to be placed on the agenda and discussed so it could be voted on at the annual State meeting scheduled for March 28 in Lexington. Tom Higgins agreed to come to George McCain’s house with President–elect 2010, Jim Strohmeier, on March 14 to meet with a representative group of the potential new Chapter Compatriots. George decided to call a pre-meeting on March 10 to discuss interim officers, By-Laws, financial accounts, grants, membership rosters, and the other essentials necessary to expedite the quick start of the Chapter.

The March 10 meeting was attended by George McCain, Harry Geimeier, Tom Geimeier, and Ray Hughes. Numerous Compatriots were contacted and if unable to attend their opinions and input was utilized for ownership and consensus. The potential members of the new Chapter were to be contacted by the above named Compatriots and invited to the meeting on Saturday, March 14 with Tom Higgins and Jim Strohmeier. George asked that each potential member be prepared to sign the Charter and contribute a “record copy” of their original application. George also asked that each new member contribute from $20. – $100. as “seed money”  for the Chapter.

Attendees at the March 14 meeting included: George McCain, Joshua McCain, McCain, Terry Collis, Harry Geimeier, Tom Geimeier, Jackie Miller, Ray Hughes, Jeff Hampton, Jim Strohmeier, and Tom Higgins. Each Compatriot gave some background information and discussed the service of their Patriot ancestor. A question and answer session followed about requirements for finalizing the new Chapter and obtaining the Charter. Tom Higgins also brought a CD with the activities of his Chapter during the 2008 year.

President–elect, Tom Higgins,  stated that the annual meeting of the Kentucky Society was going to be held in Lexington on March 28. Now with the  paperwork in order there was the possibility of leaving with an approved Charter. George Hughes, Tom Geimeier, Harry Geimeier, and George McCain contacted all potential members and made arrangements for them to sign the Charter and pick up the necessary paperwork. 23 names signed the original Charter and all necessary documentation was ready for the meeting on the 28th.

George McCain set up a meeting on March 25 with Jim Schaffer, President of the Cincinnati Chapter, Jack Langlitz, Chapter and State Secretary, and Paul Wilke, past Ohio Society President, Chapter President, and SAR National Trustee.  The purpose of the meeting was to discuss the reasons for forming the new Chapter and insuring the Cincinnati Chapter that most of the active members and officers would maintain a dual status and continue their efforts in both Chapters. The meeting was also to insure there would be a cooperative and amiable relationship between the two Chapters.  Paul Wilke also signed the Northern Kentucky- Simon Kenton Charter and has the distinction of being a member of every state society in the Central States District. The final number of names on the Charter was 23, with Compatriot David L. Boone needing to be re-instated.  The number was evenly split between transfers and those asking for dual enrollment status.

George McCain, Ray Hughes, Jackie Miller, Harry Geimeier, and Tom Geimeier made the trip to Lexington on the 28th and participated in the CAR and Kentucky Society’s annual meeting. Under old business a motion was made to create new Chapter and award a Society Charter. The members of the Simon Kenton contingent were asked to come to the stage and introduce themselves. George McCain discussed the formation steps and goals of the Simon Kenton Chapter. 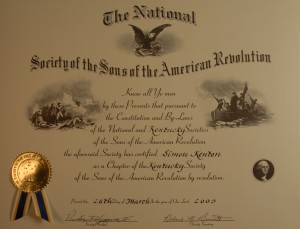 The Simon Kenton Chapter of the Kentucky Society of the Sons of the American Revolution had 23 members who signed the official Charter and became Charter/ Founding members. This was an historic event for the Kentucky Society. The Simon Kenton members will continue to support the Cincinnati and many members will continue to serve as officers and committee chairman with dual membership status.

The first official meeting of the Chapter will be on Wednesday, April 8 2009, at the Commonwealth Hilton in Florence. The first official functions of the Simon Kenton Chapter were to set up a booth at the annual Northern Kentucky University History Day; and to participate in a DAR, District 5, Genealogy Workshop at the Scheben Branch of the Boone County Library on Saturday, April 18.

Charter members of the Simon Kenton Chapter who signed the original Charter and who were duly processed by the Kentucky Society Secretary, William Schrader were:

Transfers from the Cincinnati Chapter to the Simon Kenton Chapter