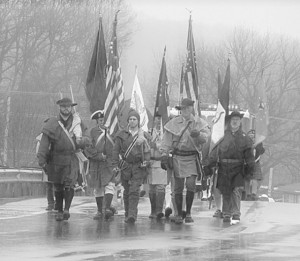 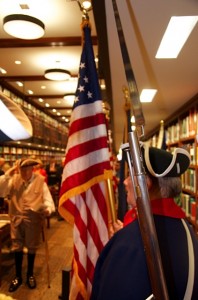 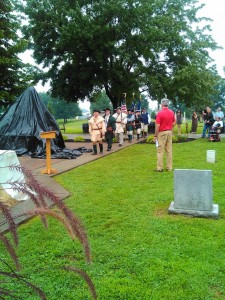 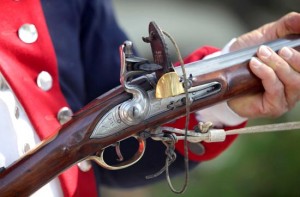 Our guard was named in honor of the great pioneer, trailblazer, settler, explorer, trapper, and one of Kentucky’s greatest historical figures. A native of Pennsylvania who migrated to North Carolina and entered Caintuckee, on May 1, 1769. Boone followed the Great Warriors Path as he explored and trapped the Indian claimed “dark & bloody land. In 1773 Boone brought the first settlers in and lost a son in the process. At the famous Battle of Blue Licks Boone lost another son, but he always moved forward motivated by his destiny.

The Northern Kentucky, Simon Kenton Chapter, felt it was just tribute to honor Daniel Boone, as the namesake of our Color Guard, and we have adopted the militia uniform or dress of the frontiersman to give legacy to his memory. We are also fortunate to have descendents of Daniel Boone in our Chapter. David and Harry Boone are descended from Jonathan, the younger brother of Daniel.

The Col. Daniel Boone Color Guard is available to post Colors and appear at area patriotic, historic, and educational events.